We woke up without an alarm, much like any other day we had in Cape Town.  The sea breeze was making its way in to our opened up room and the sounds of the waves were pounding the rocks on the shore.  We each took our time on the patio before we packed all our belongings in to suitcases, carryons, and such.  Thing was, we had way more stuff to pack than what we took over.  A set of three hand carved chairs for the grand girls (one each in each suitcase and one as a carry on), a hand carved Noah’s Ark for Scott and Victoria, some shirts for Kathy's mom, Marie as well as Tonya, material for my mom, Jan, and some art for our soon to be themed South African half bathroom.

The plan was to be back to the Cape Town airport by around 1115 AM SAST / 4:15 AM CST so we could drop off the car and get checked in to South African Air for our day plus voyage.  The trip was to be Cape Town to Johannesburg (more on that drama later) to Accra Ghana (more on that drama later), to Washington DC Dulles (more on that great experience later), and finally to Kansas City International (home sweet home).  The CPT-JNB-ACR-IAD-MCI first flight began at 1330 SAST / 6:30 AM CST and only took a couple of hours to get to Jberg, where we waited for the next flight.  Security at Cape Town International was pretty straight forwards. Matter of fact, that happened to be our favorite airport in Africa during our visit due to the ease of use and up-datedness (is that a word?).

We landed in Jberg without any incident and were bused in off the tarmac…  But realize and imagine 300+ airplane passengers being lined up cattle style to board the busses as they came to the area. It was what it was, but I was pretty glad that was the last time that we had to do that type of transfer.  The “fun” didn't start for a bit, but we were able to navigate through (the first) security line without issue.  We were able to find the bar from our first and second visits to JNB, so we partook again, as a celebration somewhat.

We entered the now-secure-gate area only to learn that there was a “mechanical issue” with the plane.  Great.  As we waited for around thirty minutes past our original boarding time, they began pre boarding of around us 300+ passengers.  What a hoot so far. We got on the plane and did what cattle people do once in their place and proceeded on our now 18+ hour ride to the US of A, via Accra Ghana, which was another hoot.  Once we got on and settled, the flight attendants shot some kind of cloudy disinfectant in to the air to ensure we didn't have cooties or something (it was for airborne diseases really, I think).

A few movies and some free dinner and drinks later (US is so money hungry compared to SAA), we arrived in Accra Ghana somewhere in the night time (it was dark out).  We had around an hour to be there to disembark some passengers and embark some others, as well as gas up and get the cabin clean.  The (more) fun came when they had security get on the plane and ask us to all stay seated.  After a bit, they then asked us to clean out the overhead bins of our carryons and still remain in our seats.  I asked, “How in the **** do we do this?”  So I got my stuff, put it in my seat and laughed a little, thinking - there is no ******* way we could sit in the seats with our stuff.  No way.  So, I stood as the gestapo security came through the cabin while the cleaners were cleaning and the pilots were hiding and the microphone was telling us to do one thing for a second then one different thing the next.  We rolled our eyes and just waited for the handcuffs because we weren't doing what we were supposed to.

After about an hour, we were back on our way with Ghana folks and others out and new people in - bound for the DC, baby!  This was the leg where not much happened other than a little sleep and some more movies.  Breakfast was served with around two hours prior to landing at DC, which worked out pretty nicely. However, the french toast was more like german sour kraut on warm soggy bread and bacon.  Well, at least the bacon was good.  We then tossed down a couple of coffees each, which was very strong (and good).

Great landings were a plenty on this trip and DC was no exception.  The landing was near perfect, or at least I thought.  It was likely due to being back in the states, but you know what I’m saying… We then disembarked (I don't know why, but that sounds cool when saying it out loud) and moved over to the shuttle tram thingy where we were transported over to USA Customs and TSA security (again).  Reminder, we have now been checked for security once in CPT, twice in JHB, another time in ACR, and now twice-ish in IAD.  This **** is fun, eh!?!?  However, the customs line was actually pleasant due to the new and improved customs custom.  TSA wasn't too bad either. Once we passed through each, which was around 30 minutes in total, we headed to the next gate which was for home sweet home.  But first, we had to get a beer. Surprised?  Bonus session, I found a bar in the airport that had Kentucky Bourbon Barrel Ale, which is some sweet nectar from the gods in the great state of KY that contains around 8.2% alcohol by volume per serving.  Salute!  After a couple of those for me and a Sam Adams Octoberfest for Kathy (they didn't have Bud Light, Mich Ultra, or any other domestic worth drinking), we headed to the gate to get to the 816.

A small plane was ok, as we were headed back home.  We had an uneventful flight and were greeted at the curb by my mother, Jan.  She also had more beer in a cooler, which is how we roll, which you should know by now.  The plan was to go home and catch up for a bit then head to Rancho Grande for a welcome back, where a bunch of KC friends joined us for some Mexican and half price margaritas.  Lots of margaritas!

After safely arriving at home via a designated driver (or so they said) around 3:30 PM CST, we perched in our recliners and started watching some college football.  I think we woke up around 9 PM to head to bed and then I got up around 5 AM and Kathy around 6 AM.  Yeah, we needed the catch up sleep, after a mere 30ish hour airport and plane ride journey (sans time change).

As I sat and wrote the catch up blogs (Sharks, wine tour, and our fearsome trip home), we were visited by many loved ones.  Scott and Victoria with Olivia and Clair came over.  Kathy mom Marie stopped by with her new (to her) Nissan Rouge to say hi.  My mother, Jan, came over to bring a test pillow case dress to size with the girls.  Tonya came over to eat leftover breakfast.  My aunt Bridget came over to deliver a couple steaks and twice bakers with a case of domestic beer and we sat in the driveway enjoying the 70* f weather. 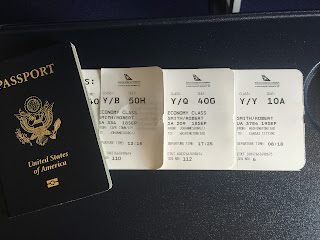 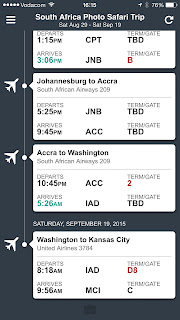 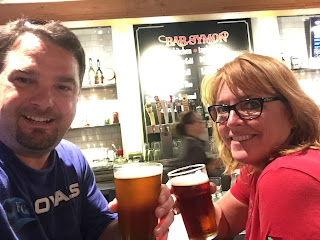 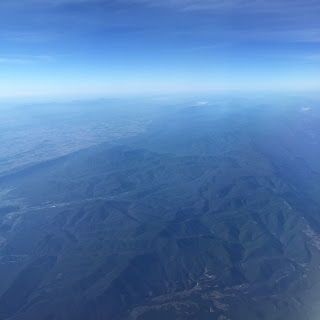 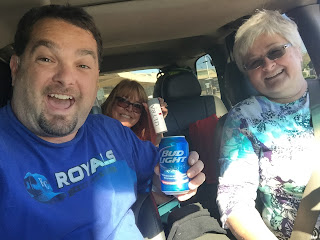 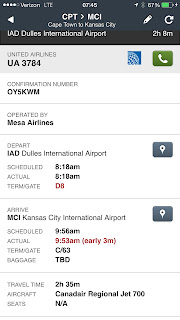 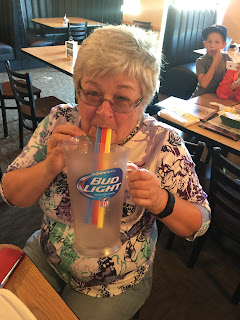