So after a good night celebrating with friends at the Rockaway Beaches, we headed for bed.  You see, it was a very familiar bed, since we were just in Queens NY in January celebrating and photographing the bar mitzvah for Jake, who is Stu and Jodi’s son.  Its funny that once you get to know your friends, visit their house several times over the years, a feeling of warmth and home comes over you.

Too excited to sleep was the mantra for the night. My internal clock went off at 0600 and I was ready to get this day going.  Since we had to rebook our DC to Jberg flight too, we ended up going out of JFK, which happens to be a 15 hour and 10 minute direct flight.  Thats right, no stops like we would have had to do on the DC flight (landing in Accra Ghanna for fuel), which shaved 2 hours off the total flight time. 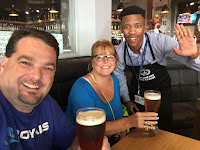 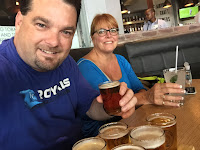 Jodi had Saturday Criminal Court to oversee, so since she was headed in the direction of JFK, she provided our drop off with plenty of time to spare for the 11:15 AM EST flight.  Yes, she is a Justice, and her name is Jodi and yes, we call her Judge Jodi (or Justice Jodi).  Its a riot!  And yes, I downloaded the Trip Case application and loaded my newest/current/most-recent/exact itinerary into it.  Yeah, thanks for the tip, Kelly and everyone else that poured salt in my humiliated wounds. Kathy ended up getting the ACB Blond Ale and I got the ACB Red Ale.  Theres no Bud Light in this country from what I can tell.  Its all good though, since I think we have found a couple of favorites already.


We arrived at Zulu Nyala, got checked in and found the bar with more good beer.  We sat outside on the covered patio and met some new friends.  One set from Pittsburgh KS, one set from Boston MS, and another from Atlanta GA.  Dinner was at 7, which was served buffet style and very very good.  Everyone here is so freakin nice, especially the staff.

We are still trying to get our internal body clocks working right, since we were basically up since 6:00 AM EST on Sunday and its now 9:00 PM ZA Monday night (which is 3:00 AM EST - 45 hours) with very little sleep on the plane rides.  Heading to bed early tonight so we can get ready for the 8:00 AM ZA Photo Safari.  Should be a hoot! 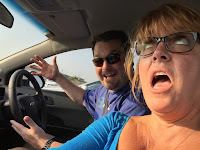 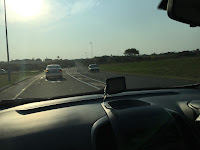 As the saying goes, poor planning leads to missed opportunity - or something like that.  Well, the poor planning wasn't intentional, from my point of view.  But it was factual.

From the start…  we planned to go to the Corner Cafe in Riverside to get a good breakfast before we headed out.  So my mother came over to get us and our bags (Kathy's weighed in at  40 lbs and mine at 45 lbs - but I had a good 10 lbs of body soap and hair care products from hers in mine…) to take us to CC.  After arriving at 10:00 AM CST and meeting our daughter, Tonya, at CC, we waited for about 15 minutes due to its popularity and were seated.  During all of that, I had the infinite wisdom to

Turns out, the itinerary changed slightly due to a little timing issue.  You see, my original schedule said our flight left at 12:30 CST from KCI to head to Washington DC (Dulles), which then set us up for a 5:30 PM EST flight to Johannesburg.  Basically there was no such United Airlines flight, so I scrambled back to my original itinerary, saw that it was real, and checked again.  No luck.  I then remembered that my travel agent sent me a revised itinerary that had some flight changes noted on the back end of the trip.  It also happened to have a flight change at the beginning as well.  That 12:30 flight was now 10:20 and it had already left.  Crap.

We continued to eat our breakfast, though everyone’s stomach was churning with nerves - especially mine.  I made some calls to United, they couldn't help.  Called my travel agent, who was traveling herself, and left a message.  Mom continued to look for alternatives on her phone as did I.  Once we were done with breakfast, we headed back home to see what we could do. I then contacted South African Airlines, who had my original booking. They said my travel agent had to initiate the change and it was out of their hands.  Crap.

I called my travel agent again and she just landed in LA, so I explained what happened (see above).  She was not in a place where she could address it, however she had a peer back at the office call me around 15 minutes later with an update that she was working on getting me in the air as soon as she could.  I let her go with great anticipation for a call back.  A few minutes later, which seemed like an hour or so, I got a call back with some options.  Long story short, what I heard on my end of the phone was great news and immediately got Kathy and Mom up and out the door while I was still on the phone.  I traded my credit card information for the glorious change fees and new flight costs (ouch, that hurt), and we were on our way to KCI for a 2:30 PM CST flight to Newark NJ and a next day flight out of JFK.

You see, as things spin in my head, I recall that Kathy and I have some very awesome friends in NYC.  On the way to KCI, I phoned Jodi and Stu, who we met in 2009 on an Alaskan cruise.  I explained the “new plan” to Jodi and she graciously volunteered Stu to meet us at Newark at 6:30 PM EST.  Once we arrived to the Rockaway Beach area, we were greeted by some of their friends at a beach house right off the Atlantic Ocean.  It was a bit breezy, but very warm with friendship, food, and some adult beverages.


I truly believe that there are reasons for what we all do.  The choice we make that affect outcomes. Some we have no role in decision making, but most we do.

Rolling back to December 2013, I was on the hook for taking photographs at the KC Magazines Most Wanted Auction, which benefits Big Brothers Big Sisters of Greater Kansas City (BBBSKC).  In the years prior to 2013, I was witness to some pretty good auction items.  Some were “reachable” for Kathy and I, but we never took the opportunity to bid on any of the packages.  From a night out on the town, to going to the set of Modern Family, it seemed like a dream that we just could not afford.  You see, I have been a part of this Most Wanted Auction since 2008, so I have seen plenty of money raised by great volunteers that they formerly called ‘Sexy Singles’ and which are now called Most Wanted due to the involvement BBBSKC would like to get out of its namesake in KC.

So back to 2013…  I happened to see that there was a 6 night 7 day photo safari for Zulu Nyala, which is owned by Shaw Diamond, which began back in May of 1981 when Trevor Shaw, the founding member of the Zulu Nyala Group, decided to take a risk and buy a remote 15,500 acre piece of land in the middle of Kwa- Zulu Natal.  The fact that Kathy and I were in a good place and seemingly able to afford such a trip, I devised a plan.  The plan you ask?  Convince Kathy that this is something we should do.  It did not take much, but I did have to set a price for her to bid up to, since I was going to be taking the photos of the event for BBBSKC.  Of course, someone was bidding us up and we went a little over our budget, but that is ok, no one got hurt

I wont reveal the price on how much we spent for the initial package, since I believe they will have these packages again in the future.  Who knows, maybe Kathy and I can be a Most Wanted some year and have this be our auction package.  However, I can say after extending the trip slightly (3 weeks total), investing in flights, tours/excursions, clothing to look cool, and of course, some camera gear - we could buy a pretty nice used car.  Don't ask me if its worth it.  Because I will tell you, without even going and experiencing South Africa towns of Johannesburg, Richards Bay, and Cape Town, as well as Zimbabwe’s Victoria Falls, I feel like a kid on Christmas Day at the opportunity and will make this be one of the best experiences that Kathy and I have ever had together.  Oh yeah, and we are celebrating the double nickel birthday for Kathy!