Since the weather wasn't really cooperating with us, we decided not to tour Table Mountain and instead go to town to shop at the Waterfront Mall.  I did some photo editing and blogging updates, but mostly could only get the blog updated without the photos due to the less than stellar wifi around here.  No, they do not have Google Fiber…  Oh well.

Before we hit the shopping district, we dropped off some laundry at the laundry mat and had the gal (not the guy) take care of it while we were out.  Our condo charges an arm and a leg to do it, so since we had a car, we took it to town and saved about 75-80%.  That means more beer money, kids! :)

Once we got to the Waterfront, we walked around looking for a good lunch spot.  On the outside of the mall to the northwest section, there is three stories of restaurants from KFC and McD’s to 4 star high dollar establishments.  We settled on a place called San Marco, which had a nice menu that looked like it fit great with what we wanted.  Kathy ordered another round of calamari to start and prawns and rice for lunch, while I had the bacon cheeseburger.  Everything was awesome including the Castle Draughts we consumed (Kathy had the Amstel tho).  The thing about this stop though was the people watching.  We were on the main level where folks were going in and out of the mall. Holy moly, it was like people of Walmart in South Africa.  To top it off, there was a (presumed) mother and daughter combo that came to the patio and sat across from us. Not a big deal, until the daughter was hanging all over the mom, hugging and kissing, holding hands, lifting her leg straight up in the air while sitting, and some other PG-13 stuff that I don't care to mention.  Entertainment at its finest in Cape Town.

We finished lunch and headed in to the shops to look for some more souvenirs for the peeps back home (you know who you are).  However, the mall was just that, a mall and not a real touristy place to get stuff like that.  We walked the entire place only going in to a handful of stores before exiting outside.  We did happen across a shop that was not associated with that mall directly and scored a couple of things.  We also ran in to another mall location that had a few shops strung along a hotel lobby.

The next item on our agenda was to go to Cape Town Harley Davidson, which is right downtown.  It wasn't a very big place, with only around 20 bikes for sale inside and a few racks of clothing for sale.  We picked up a few items, including my requisite HD shot glass for my collection at home, and headed to the sales counter.  There is where we met a couple of lovely ladies who helped us check out.  Of course, they had to ask us where we were from, since we had the accents here.  We said we were from the US and chit chatted about our holiday (i.e. vacation).  I flipped out my phone to show them a couple of my good shots that I had saved from the game drives and remembered I had a photo of my HD motorcycle on there too, so I showed them that as well.  The one girl jumped up and down and went out back to the shop and confirmed that there was another bike just like mine getting detailed back there.  She asked me to go back and sure enough, same exact bike.  What are the odds since there were only around 1,800 of them made with the same paint scheme that year?!?!

Of course, Brian's was calling our name, as well as the laundry we needed to pick up.  So we headed that way, got the laundry, which happened to be right across from Brian's, and then headed in for our “Beer Drinkin Monday” session at Brian's, instead of 54th St Grill and Bar which we normally frequent.  All of our new buddies were in there as usual as well as a few new faces.  We befriended a guy that transplanted from London to Cape Town 16 years ago and told him our holiday (i.e. vacation) story as well.  Mark was also there and we confirmed that we were to meet on Tuesday between 2-2:30 PM SAST for him to take us to a couple places that he likes.  Fun times to be had at Brians!  Not a bad day considering the rainy weather we had.  It could be worse, we could have been stuck in a cubicle working instead… 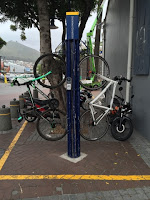 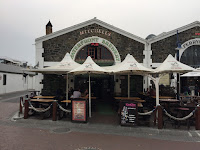 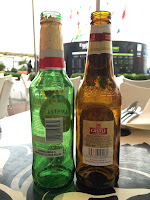 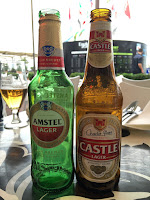 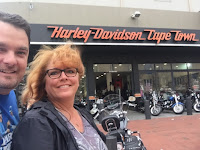 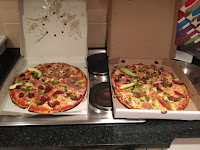