This day met us with a hefty amount of interstate travel.  We heard 14 hwy was quite smoky, and we wanted to get to Devils Tower in the morning and Sturgis by lunch, so that is why we rode I-90.

We rode for around 3 hours from Sheridan to Devils Tower National Monument.  Stopping once for gas and water, we arrived at our first destination and took it all in.  If you have never been to Devils Tower, I highly suggest it.  It was my second time there and I enjoyed it as much as the first time.  This time, I opted to go in to the park, since we had our super duper America the Beautiful park pass.  :)  Not much to see, if you don’t feel like getting off a bike and hiking up to the monument, so we went back down and had some fun with the prairie dogs.


Once leaving Devils Tower, we headed for Hulett, which is a popular gathering spot and destination for bikers that enjoy Sturgis bike week.  We stopped at The Ponderosa Café for a couple cold ones before moving on to Sturgis.  Not much to mention about the bar and café, other than it was pretty dead, but greatly expanded since the last time I was there in 2005.


Once in Sturgis, we found a spot to eat called Loud American Roadhouse for lunch.  Each of us would typically split a meal between with our spouse, which we planned on doing this time as well.  When ordering, Ronnie asked the server if we could split the $16 all you could eat beef tips, which was the special of the day.  She said sure.  We asked too, she said sure.  We. Got. Stuffed. 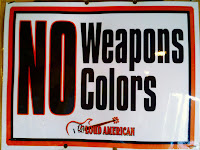 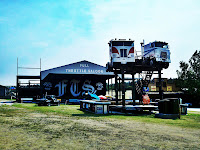 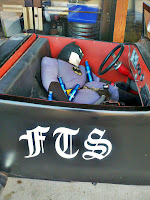 We moved from Loud American Roadhouse through town to the Buffalo Chip, which was where Kathy and I stayed in 2005 in our toy hauler with another couple.  Once we explained how the location was set up, we went down the road to Full Throttle Saloon to show to Ronnie and Theresa.  We met the 100% pure bread Jack Ass named Emmit, who didn’t give us much face time.  Emmit was hanging out by the air conditioner fan and went over to eat his cheerios that were laying on the floor and drink out of his water bowl.

We took out of Sturgis about as quick as we got there and headed towards Hill City, through Deadwood, down 385 Hwy.  What a wonderful road.  Once we got in to town, we located a gas station and got some fuel and water.  It was also our option for looking for a hotel or motel. After a couple of calls, we found The Lantern Inn Motel, which was close to full and about the right price ($150) after splitting a double queen room.  This was our coziest landing spot, but worth it, since it had a small kidney shaped pool to dip in after a hot day on the road.  Ronnie and I wondered across the road to the supermarket/liquor store to score some beer and “tea” as Ronnie calls it.  Then, we enjoyed the pool for a while, meeting more nice people from all over the states.  It was a good location to say the least. 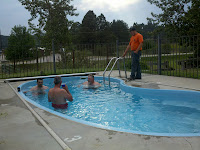 Since tonight was laundry night, we had to locate an eating spot near the laundry mat, which happened to be located within the gas station we had stopped at earlier.  We settled on the Mangy Moose Saloon for some beers and burritos, which was a nice place and had good food.  Once dinner was done and laundry was folded, we headed back to the motel to get some shuteye.