Day 7 – Friday, June 29 – Choteau MT to Red Lodge MT
We woke up after a well-rested evening in our respective motel rooms.  We departed Choteau Montana on 89 Hwy south and agreed to stop in Great Falls for breakfast.  What do you know, we found a McDonalds again.  We looked at the day’s route and planned one that took us to Red Lodge Montana.

Before we left town, we had planned to find a post office branch to mail back some unneeded clothes as well as some shirts that we bought for some of our help back home.  The phrase, “if it fits, it ships” comes in to play here.  We bought the $15.95 box, which includes shipping to anywhere in the continental United States.  We shoved quite a few shirts and other clothing articles in there and off it went.  Ronnie and Theresa did the same thing.  Though the bikes didn’t feel any lighter, we knew they were, even if only slightly.

We motored down the road through the Lewis and Clark National Forest towards I-80, only for a little bit.  A couple miles outside of White Sulphur Springs Montana, right where 89 hooks up with 12, we happened across a red Cadillac driven by a mid 50 year-old woman with a red handkerchief waving out her window trying to get our attention.  I turned the Harley around to see what her issue was and as I approached her passenger window, she stated that there was a cattle drive on up the road and wanted to warn me of it.  Quickly, we realized how big the cattle drive was.
There had to be well over 200 head of cattle, on the road, with no way around them.  We basically had to stop and wait for direction from the three-or-so cowboys and two-or-so cowgirls.  There were also a couple of 4x4 trucks managing the cattle.  The guys nearest us were waving us to go through slowly and rev the motors a little to make the cattle scatter.  So, we moved closer in amongst them, as they moo’d – loudly.  Kathy was snapping photos above my head as I navigated through the cows, then the cowgirls near the end were waving us off to stop where we were.  Uh oh!  Now, its our two bikes and two others we picked up while we waited now in the middle of a two lane road with 200 head of cattle surrounding us.  One of the other bikes and I were in the lead and just proceeded on, which I think pissed off the cowgirls and the old guy in one of the trucks, but oh well.  It wasn’t safe in the middle!  We made a hole and went for it. I will say, that is a first for me, at least on a motorcycle.  We paused in the small town of White Sulphur Springs at The Lane Bar, where we recapped the event to each other and the bartender as we sipped our beers. 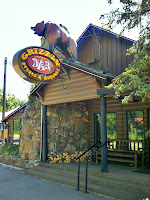 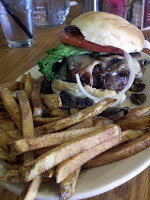 We continued down 89 hwy towards I-80, hopped on the dreaded interstate, and made short of it.  We did have to pause for a gas and water stop around Big Timber.  Once starting back on the way to Red Lodge, Ronnie noticed his F1/FI light came on and started blinking.  We attempted to troubleshoot it on the side of the road, however could not figure it out.  Cautiously, we forged ahead, checking in with each other regularly to see if the Goldwing was acting up or not.  It appeared to be fine, but the light was concerning to Ronnie.  We then took off the interstate on 78 Hwy near Columbus Montana and rode to Roscoe.  The advice, from my boss at my regular work, advised us to eat at the Grizzly Bar and Grill for a hamburger lunch.  He was not wrong – it was great!

We cruised on down the road in to Red Lodge Montana.  Red Lodge is another ski town, but at the base of Bear Tooth Highway, over the pass, is proclaimed as the most beautiful drives in America.  This was one of the roads we looked forward to, since it has sweeping turns, switchbacks, and an elevation of 10,947 ft.  The shops and eateries are that of a ski town as well.

We went in to a watering hole called Snow Creek Saloon, which was referred to us by our friendly bartender at The Lane in White Sulphur Springs Montana.  What a recommendation she had.  This place had all the right feelings, from the bumper stickers and license plates on the walls to the loft where the band plays.  I felt right at home.  We each got a beer and chatted about which hotel/motel we saw that looked appealing.  We also inquired the bartender, who offered us a couple suggestions.  I called a couple of places, and similarly to a couple of other times on this trip, it went to voicemail.  Interesting thing was, the Yodeler Motel called me back by using their caller ID and we booked with them.  It was a two-bedroom studio with a kitchen for $99, and happened to be their last room available.  Score!

I was taking photos inside the Snow Creek Saloon due to its eclectic look and a lady walked up to me and asked me about my attraction to the establishment.  I said I really liked the place and she offered that it was for sale.  How did she know that?  She was the listing agent for the place.  It’s only a cool $850,000 offering – pocket change, right?  I quickly started rolling ideas of owning a bar through my head, with Kathy shaking her head from side to side, knowing what I was thinking.  It was quite humorous, but man, what an opportunity for someone that has the desire to live in a ski town.

We left the bar after talking to the realtor for a bit and then settled in to the room by unpacking our bags and stuff.  During our unpacking, a few guys on bikes approached the area, where we made small talk as we wiped down our bikes.  Turns out that one of the men on a trike was the Mayor of Mitchell South Dakota, Lou Sebert.  He brought a few of his son-in-laws with him, including a South Dakota State Trooper.  Everyone was great to talk to and they even shared their beer with us.  They take a trip from Mitchell, meet some buddies in Rapid City, and then head to Red Lodge every year.  Wish I were close enough to do a long weekend to this place! These guys were great.

The guys mentioned that there was a great place to eat downtown, which they were all headed to.  We took their advice and walked to town for dinner at the Carbon County Steakhouse.  Kathy and I opted to split the Cowboy Coffee Ribeye, which is the steakhouses claim as “Our award winning ribeye rubbed with our spicy blend of seasonings. Charbroiled then finished with a sweet spiced rum demi-glace. 12oz $29.95 18oz $34.95."  Kathy and I also split some mussels.  And her $5.50 advertised margaritas ended up $3 more for the patron option... We waddled back to the hotel for a nights rest.